I had a rough night.

I recently transfered to this new league. It’s a ranked league that’s often seen at nationals. I came from a tiny tiny league in a small town on the coast of Maine. A big jump. Despite this, and despite warnings at the rink that “it’s very competitive,” and despite only having skated for 1-2 bouting seasons, I was sure my new league would find me “hometeam-ready.” They didn’t. And I was very disappointed. I did make the league, officially.

But, suffice it to say I was very sad last night. I gave it my all and I thought I would be allowed to skate with the home teams.

But it’s a new day. It’s the day I have to put on my great attitude and be a good athlete and true derby girl. Today is bounce back day. And I am. I feel better. I’m going to train harder. I’m now with a whole new bunch of women who are more experienced than I am and who are going to teach me a lot — and that excites me. I’ll be doing that  in “the pool” (non-drafted skaters and fresh meat) for a while. And that’s OK.

Actually, it reminds me of trying out for Footloose at my high school. It was my freshman year and I was cast as Alice. (There is no Alice in Footloose, by the way). “Is Alice an extra?” I asked the drama teacher. “Yes,” she said. “Oh. Great. I’m going to be the best extra ever,” I told her. She smiled.

I just have to be the best “select grade” transfer ever now. 🙂 I mean — I got onto a very good league with only a couple of bouting seasons under me. That’s something to be proud of.

The training committee told me it shouldn’t take me long to be a hometeam skater. They told me the skill I need to work on is my speed skating form. Of all the things that could have been said to a skater, that’s pretty good, I think. Attainable. It’s not my blocking, jamming, speed, endurance, attitude … tough things to work on.  I plan to show them my enthusiasm and how I welcome their input. I’ll find a buddy with great speed skating form and work on mine. I’ve emailed my local skate club and asked if they know anyone who would be interested in giving me some speed skating lessons.

Derby is about endurance. This is something to endure. Derby is about falling down and getting back up — quickly. This is my time to brush off any pain and put on my skates and get low until I’m drafted. Until I’m a better athlete. A better person. Wiser, more patient, more skilled. This is me, about to grow. And growth hurts and is fulfilling. All we can do is give it our all, try our best and leave it all on the track with no regrets. That’s what I plan to do next. I’m ready.

One thing I’m proud of: My bounced-backedness … resilience? Three things I’m grateful for: A community of readers I know will empathize and not criticize, time to work on my form, the [earned] privilege of being able to skate for this new league.

Today, a shout out to Bangor Roller Derby, a team I once skated with.

BRD made it onto PostSecret with this gem. 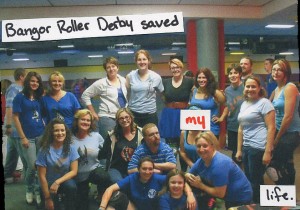 BRD just got off the ground and recently started scrimmaging. They’ve fought hard to keep girls skating through venue-shifts and drop outs, so it’s nice to hear that BRD, like lots of derby leagues, is helping people through hard times.

I moved to my new town a week ago. I miss my friends and the comfort of home, but yesterday someone added me to my new leagues fresh meat private facebook page. People have commented on my arrival including, “Welcome to the [North West] Dash, u have a built in family here!”

And it’s true. I don’t know these ladies yet. And, to be clear, I don’t need someone to save my life, but that sense of belonging, community, friendship, camaraderie of lots of women working toward a common goal feels like home. I recently took a long road trip through the United States and Charm City in Baltimore let me skate a practice, as did Bay Area Roller Derby in Oakland, California. And after weeks of not showering, of sleeping in my car and eating peanut butter on bread day after day (OK, that actually felt sort of normal), having my feet in sweaty skates and touching the skater in front of me’s back in a paceline felt like a refreshing wave of normalcy. Of home. No matter where I was. I’m glad this lady found that sense of home and love and support in Bangor Derby.

For me, derby didn’t save my life — it made me a better person (that’s a blog post for another day) — but it’s nice to hear (and re-hear) that it’s saving someone else’s. It’s a hard lesson to remember in minute 80 of endurance practice that the attitudes we have and the love and support we show our teammates on the track matters — it could be life or death.

(One thing I’m proud of: Enduring one hour of strength training and one hour of endurance practice yesterday; three things I’m grateful for: A support system of women from my last league, the acceptance and enthusiasm my new league is showing me, my best friend and derby mentor Mistress of the Knife for getting me this far.)

Bonnie D Stroir gives a great pep talk. So does this guy [sort of] who studies happiness and says, “See what we’re finding is it’s not necessarily the reality that shapes us, but the lens through which your brain views the world that shapes your reality. And if we can change the lens, … we change your happiness“

It’s super hard to remember this. Especially as a roller derby player. The women I have skated with never seem to realize how awesome they are. When you tell them they did a great job, they often shrug it off. Bonnie talks a lot about this too (sorry, but this is a very Bonnie-inspired post).

At a tournament I went to a few weeks ago I saw a jammer slide right through a pack of six blockers — and only two were on her team. She came in for a second pass and picked up a couple points, but not all four — overall, adding to her team’s score. But the girl tugged the jammer panty off her helmet and started berating herself at her teammates. In my head I was yelling, “You got lead jammer and scored two points with only two of your own blockers in the pack, that’s fantastic.” But I could hear her saying she got only two points and she sucked. Did this “I suck” attitude help her play the next 45 minutes of the game? Did it make her want to excel and help her teammates and believe in herself to score more points next time? Probs not. She was scolding herself for success.

And we do it all the time. This happened to me yesterday. It was my second transfer skater tryout day for my new league. I won Most Valuable Player for my team in the scrimmage. The way this league works is that I prove myself in two days and then they tell me my placement, which determines which teams I can tryout for (if any). When I came home and told my girlfriend I won MVP she said congratulations. I said, “Thanks. We’ll see if it counts for anything.”

Oh, Dash. Was MVP not good enough for you? On your SECOND day of practice? I too need to learn to celebrate my small victories. Because happiness is something we practice. And it’s a weak spot of mine right now. I see my goals: make the best placement, make the travel team this year, make it to nationals next year, make it to Team USA after that. But if I can’t be happy about allllll those billion things along the way, what makes me think I’ll be happy if I ever do wear a Team USA jersey? Just like my jamming and blocking and endurance, I need to practice being proud of myself and happy where I am now.

SO, as a staple on this blog I will have at the end of each post: one thing I’m proud of and three things I’m grateful for.